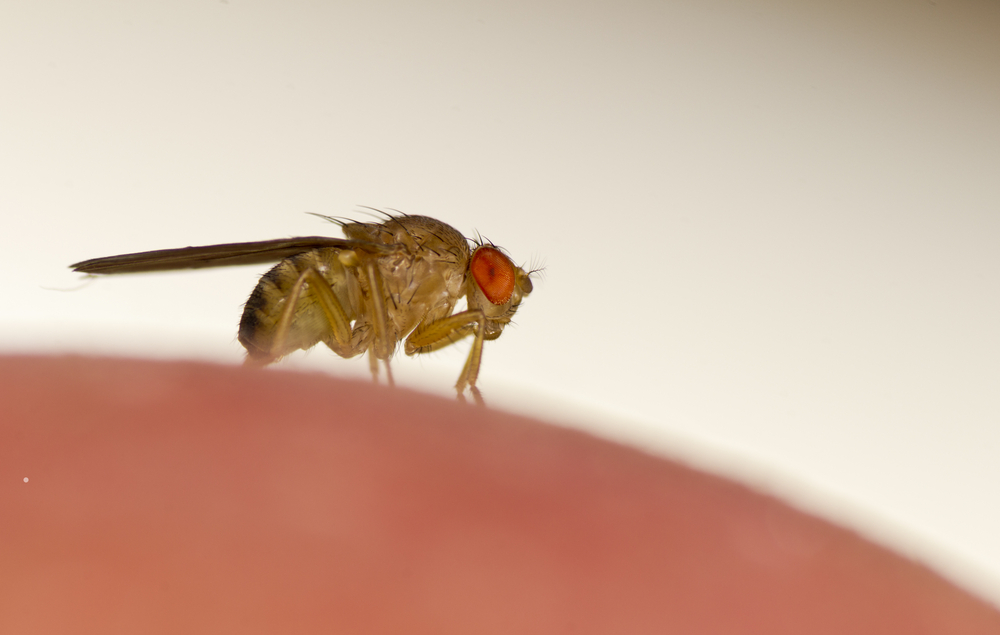 Fruit flies are second place only to crickets in their popularity as a feeder insect, as they are excellent fare for the tiny young of many carnivorous invertebrates, amphibians, and reptiles that would not be able to accept larger insects. They are also very nutritious and do not usually transmit diseases, like some other feeders.

Despite how necessary they are for the hobby, fruit flies are often very hard to source without making expensive online purchases or traveling to specialized pet stores. The best way you can keep your tiny pets fed, then, is to rear fruit flies yourself. It is fortunate, then, that fruit flies are very easy to rear.

Here are a few of the most common species & varieties of fruit flies that you can culture at home.

D. melanogaster is possibly the most popular captive insect on Earth, in particular as a model organism used in laboratories. It is around 1/16 of an inch long as an adult and is exceptionally easy to rear, taking only 2 weeks from egg to adult. It is readily accepted by the smallest captive insects and is often one of the only choices when trying to feed very small mantis nymphs and tarantula spiderlings.

D. hydei is a much larger fruit fly, averaging around 1/8 of an inch long at maturity. It is a much heavier and bulkier fly than D. melanogaster and is a fantastic feeder insect, particularly for mantis nymphs and tarantula spiderlings. The D. hydei life cycle takes around 21 days to complete.

Both D. melanogaster and D. hydei both have winged flightless and wingless varieties available. These varieties are just as nutritious as their fully flight-capable counterparts and are significantly easier for the keeper to manage, as they will not escape. They are also much easier for terrestrial animals to consume, as they cannot fly away. Wingless fruit flies are ideal for most situations and most animals.

Fruit flies can be reared in a variety of glass and plastic containers. The most commonly used containers in the hobby are 32 oz plastic cups with mesh lids, but you can use jam jars or clear plastic cups. They cannot be kept in complete darkness, however, so the container needs to be transparent. They will also need a lid made of a breathable material that they cannot escape through. You will need to fill the container with a growth media, usually no more than 25% full, for the larvae to feed on. You should add a material for the adults to rest on, as well. This will encourage mating and allow for the production of more flies. You can add crumpled paper towels, excelsior, or coffee filters to provide the surface area needed. Keep your fruit fly colonies in indirect light, as direct sunlight will cause overheating and darkness will prevent reproduction.

In order to grow and breed fruit flies will need a media in which to lay their eggs. This media will also serve as the food source for the larval flies as well as the adults. Most retailers selling fruit fly cultures will also sell pre-made media in powder or gel form, perhaps the easiest way to begin rearing fruit flies. Fruit flies are an incredibly adaptable insect, however, and can be reared on a wide variety of foods. As such, there are also a great number of recipes for home-made media which make rearing fruit flies far more effective. Perhaps the most simple one is as follows:

Liquefy all ingredients except the oatmeal in a blender. Fold in the oatmeal and mix, adding more oatmeal until the media is firm but still very moist. Add water if needed for either blending or when mixing in the oatmeal. Fill each container no more than one-quarter full with media. Add 20-50 adult fruit flies and cap with a breathable material. Cheesecloth or a paper towel folded over a few times and secured with string or a rubber band will suffice. This recipe should be enough to fill 6-8 containers, and excess media can be frozen until you need to use it.

Temperature is perhaps the most important variable when rearing fruit flies of any species. The higher the temperature the quicker the reproduction, up until a point. At around 85 degrees Fahrenheit fruit fly colonies will start suffering damage and if they are kept too hot for too long the colony will stop breeding entirely and mortality will increase dramatically. Once the temperature dips lower than 70 degrees Fahrenheit the colony will slow down dramatically, reproducing very slowly. Once the temperature dips low enough, mortality will increase. Any amount of time under freezing will lead to the death of the whole colony. Supplemental heat can be provided with a heat mat placed under the container.

The fruit fly life cycle is a short one. Drosophila melanogaster can mature in two weeks and D. hydei in 3. Though it does depend on temperature, an adult fruit fly can generally live up to 1.5 months and females can lay an enormous number of eggs in her lifetime, up to 400 after a single mating. This means you can use one single fruit fly culture to produce a remarkable number of fruit flies in a very small amount of time.

Fruit flies do not require any special conditions to mate. In nature mating would take place mostly near the food source the females would lay her eggs on. In the confines of a culture container food is always at hand, and as such mating will happen by default. To initiate mating a male fruit fly will court a female, touching her with his legs and vibrating his wings. If she rejects his advances she will either leave or kick him until he gets the message, and if she is interested she will reciprocate his advances and mating will begin, usually lasting around 30 minutes. After mating, she will reject other males and focus on egg-laying. Female fruit flies can store sperm, allowing them to lay eggs multiple times from one mating.

The female will look for a food source that she can lay her eggs in. In this case, the food source is the media. Fruit flies can lay large numbers of eggs, 100 in a day, which will be laid directly in the media. These eggs will hatch into the first instar larvae after 24 hours. You can slow the hatching of eggs and development of larvae by placing your colony in a cooler location, if you find the rapid reproductive rate of fruit flies to be overwhelming.

There are three larval stages, known as instars. It only takes one day for the larvae to go from the 1st to the third instar, which lasts for 4 days and is the instar that does most of the feeding. Larvae appear similar to very small maggots and are often very active.

Once a larva has grown to maximum size it will leave the media, often climbing up onto the walls of the container. It will then become a pupa, appearing similar to a small brown grain of rice. It will remain in the pupal stage for around 4 days upon which the adult fly forces its way out of the pupa and the fruit fly life cycle can begin again.

It’s extremely important that you regularly harvest flies from your colony to prevent your colony from becoming overcrowded. Crowding can cause disease and ultimately stop the colony from breeding. Harvest from your fruit fly colonies by opening the container and holding it an angle. Tap the container until you have harvested the desired number of fruit flies then quickly place the lid back on to prevent escapes. You can then then directly feed these flies to your pets or use them to start new colonies.

You should not need to clean your fruit fly colonies beyond removing moldy media, as fruit fly colonies tend not to last beyond a month. You can prolong the life of your colonies by removing mold and regularly harvesting, though once the media has run out the flies will stop reproducing. The best way to ensure a steady supply of fruit flies is to start at least one new colony each week, depending on how many flies you need. This way as older colonies die out you will have new ones to replace it. When starting new colonies choose flies from healthy colonies that are free of mites to prevent mite infestations and bacterial infections, which tend to build up in older colonies.

Here are some common problems that you should look out for when breeding fruit flies.

Almost all kinds of pre-made fruit fly media will contain some kind of anti-fungal to prevent molding. Homemade media, however, is very susceptible to molding. If you have mold developing in your fruit fly colony you can cut the mold away and dispose of it. Keep moldy cultures away from your other fruit fly colonies, however, to prevent the mold from spreading. Feeding fruit flies that have had mold in their container is not dangerous to your animals, so you can still feed as normal. If you have persistent mold problems you can add an anti-fungal to your media mix. A popular option is food-grade methylparaben, commonly used to preserve cosmetics, which is fairly safe for your animals.

Bacteria will naturally grow on your fruit fly media and will be consumed by the larvae. There are certain bacterial infections, however, that can cause your fruit fly colony to become sick. More dangerous, however, is the fact that some of these pathogens can be transmitted to other insects. If you notice many dead fruit flies, fruit flies that are dying and discolored, or large amounts of dead and dark-colored larvae you should euthanize the entire culture. You can do this by placing the culture in the freezer.

Mites are very common in fruit fly cultures. Small numbers of mites are unavoidable and usually harmless, but large numbers of mites can indicate a serious issue with your culture. The best way to deal with mite infestations is prevention. Keep your fruit fly colonies in clean containers, preferably in another container lined with paper treated with mite powder. Mite powder is usually made of diatomaceous earth and will kill mites and other insects that walk across it without harming your fruit fly colonies. Make sure you regularly clean the area you keep the fruit fly cultures in to eliminate mites. If you have a mildly contaminated culture you can continue to use it, but you should separate it from your other fruit fly colonies to prevent further mite infestations. If you have a severe mite infestation it is best to discard the entire colony. Mites tend to appear in older cultures, which is why it is important not to keep cultures too long.

Fruit fly cultures exude a significant amount of liquid as they age, which can build up and cause many fruit flies to drown. It will also make harvesting significantly more difficult as well, as liquid can spill out of the container. The best way to avoid this is to mix the media properly with enough dry material to absorb water. You want the media to initially be moist, not wet. You can fix a colony that is becoming soupy by adding more dry media (often oatmeal or potato flakes).

Though the smell of a fruit fly culture is not always pleasant, it will usually not leave the confines of the container. If you notice an unpleasant smell coming from your fruit fly colonies you should examine them for excess moisture, which will promote uncontrolled bacterial and mold growth and produce foul odors.