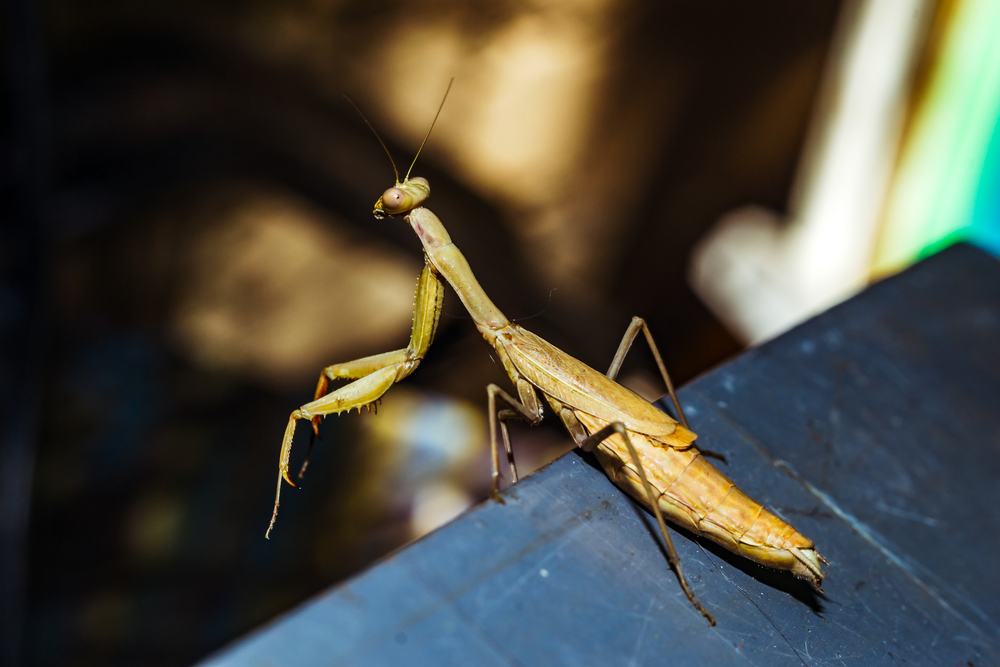 Praying mantis can fly, but not in the typical way you would be expecting. Due to their anatomy and hunting style, they can perform intense and highly specific flying patterns as well as being able to perform long gliding jumps. Males are also, typically, the only mantid of the sexes to be able to fly.

Why Typically Only Males?

Male mantids are anatomically built differently than females are. Males have longer, thinner wings as well as having a lean built body, allowing them to take flight easier. Female mantids have short, thick wings but they also have a much heavier body weight due to needing to keep fat for her future offspring. In some species the females have even smaller wings, giving them no chance to take off. Even though many species of mantids have a size-based sexual dimorphism (males are smaller than females), the males always have more developed wings than females do.

In certain species, such as the Chinese Mantis and the European Mantis, both sexes can fly. Due to the weight difference with females being heavier than males, females are only able to perform short flights while males can perform much longer ones. Males rely on their ability to fly to find food and new females to mate with, while females only use it to get away from predators. Both sexes do still have the outer protective casing to their wings, allowing them to use them as a threat to predators and making themselves appear larger than they actually are.

An interesting fact about mantids is that if they have wings, they won’t develop until the adult stage. When the nymphs reach sub-adult (the molt right before their final molt into adulthood) they finally have visible wing buds, and when the final molt to become an adult happens, the wings appear, fully developed and ready to fly!

While young and still in their nymph stage, mantids rely on jumping to move quickly over long distances. Mantids, even nymphs, have a much more powerful jump than any other insect. They can also run very quickly, this allows them to run and jump quickly out of harms way.

Mantids have a variety of wing types across their 2,400 different species. Some mantids are known for their large and distinctively colored wings while others have very underdeveloped wings. Other mantid species have no wings at all and are considered to be ground-dwelling mantids.

Ground-dwelling mantids actively hunt their prey, having no use for wings. One species native to the south-west United States and Southern Canada is the Agile Ground Mantis (L. minor). These little 3 cm long insects use camouflage to blend in with the ground to be able to hunt with minimal predator interference. Females have no wings at all, however, they still have their protective wing coverings or wing pads. Males do have developed wings but they are small and still not used for flight. Due to being ground-dwelling, they have no need to detect bats and have an underdeveloped singular ear and hearing ability compared to their flying relatives.

Species that rely on camouflage extensively to hunt and hide are less likely to be found flying. For example, an Orchid Mantis uses its elaborate leg lobes and white and pink coloration to pull off the appearance of being an orchid flower. The illusion is shattered if the orchid flower takes off into flight.

Uses for Wings and Flight

Species of mantis who have wings typically use flight for a few things. Females who can fly often use wings to move longer distances than they can walk. Females are typically more sedentary than males are, meaning they wait for their food and mate to come to them. When threatened, however, females will fly away or jump to be at a safe distance. Males rely on their wings to find and hunt prey and when they are old enough to mate they use pheromones as a trail to fly and to find an eligible female.

When mantids are flying they become easy targets out in the open for predators such as birds and bats. Mantises have a unique feature to keep them safe which is a singular ear. This ear is located on the front of their chest between their front legs. This adaptation allows for them to hear the high-pitched frequencies of bats, allowing them to find cover before the bat even knows they are there.

Most insects rely on their hearing to hunt or find mates, but mantids are unique in that they mostly only use theirs for predator avoidance. Mantids have better eyesight than a lot of insects which allows them to hunt visually much easier. While mantids can make noise, they mostly communicate using pheromones. The main use of their single ear is to avoid predators during flight.

Species that have wings have two sets of them. The outer wings, or tegmina, are narrow and more leathery in texture and appearance. These wings are used to protect the hind wings as well as providing more detail into the mantid’s camouflage. The hindwings are clear and very delicate but play the largest role in the ability to take flight, making protecting them essential to survival.

Several species of mantids use their outer wings to scare away predators. For example, the Indian Flower Mantis has large “eyes” on their forewings which can be spread open to appear to be larger than they are and to give the appearance of being a creature with large eyes. Many mantid species choose to run before they give an open-winged threat to a predator, but for many species being able to scare away possible predators can mean a difference between life and death.

How Do Praying Mantises Fly?

Mantids use branches or leaves as a jumping point to fly, allowing for a powerful takeoff. They are highly successful at sticking their landing on their specific target, but can also change directions on the fly. They can twist their body which allows for quick and highly accurate directional changes. In fact, they can rotate 2.5 times in one second while in mid-air. This means if a mantid hears a bat mid-flight they can change course quickly to land on the ground and find cover.

Mantids are also unique in their ability to rotate their head while flying. They are constantly on the lookout for new prey targets, possible predators, and potential landing spots. Thanks to their two compound eyes being spread out and on the side of their heads they have an extensive binocular field of view that creates stereoscopic vision. They also have highly developed eyes, for insects, allowing them to detect minimal movements in the brush or in the air while flying. During mating season males fly to the females using pheromones and sight, so being able to look out while flying can be highly useful for that situation.

In conclusion, many species of mantids rely on their wings and flight for the survival of both themselves and their lineage. Being able to fly is essential for males to find females in search of a mate. The adaptation of stereoscopic vision and having one singular ear allows for much safer flying, allowing them to detect bats and other predators. Mantids are also highly agile when flying and can change directions instantly and can land accurately on very specific targets. Certain species no longer have wings or have such minuscule wings that they cannot perform flight, instead, they become ground-dwelling. Even without the ability to fly, nymphs and wingless mantids have the most powerful jump of all insects. These highly adapted insects excel at using their wings and ability to fly as survival tactics both for themselves and their future generations.